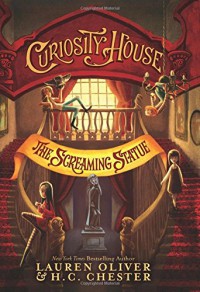 Lauren Oliver is back, with another adorable and mysterious entry in the Curiosity House series. If you'll recall, I was pretty head over heels for the first book in this series. The fact that this is a Depression era mystery, set up for Middle Grade readers, never ceases to impress me. However it's really the characters themselves that keep me coming back. Sam, Pippa, Max, and Thomas are just the cutest little ragtag group of detectives that there ever was. I don't care how many books there end up being in this series. I'll read them all.

I admit that The Screaming Statue was perhaps a smidgen less exciting than the first book. Mainly, this was because there's a lot more introspection into our characters and so not quite as much action. Honestly though, that ended up being a wonderful thing. I learned so much about their hopes, their dreams, and their fears. Lauren Oliver does a wonderful job of addressing the fact that a family doesn't necessarily need to be blood. The bonds built between these characters were strong, and the ending of the story only brought them closer together. I couldn't help but sigh a bit, for the happiness of it all.

Since I was a young reader, I've always loved stories that aren't afraid to tackle how scary the world can be sometimes. I think Lauren Oliver has perfected the art of doing just that. Her characters are wonderfully vivid and full of personality. However, at the end of the day, they're also just human. They may have amazing abilities, but they're still just kids who are scared sometimes and hurt sometimes. They're mortal. I love that, and I love these books! I'm eager for more.