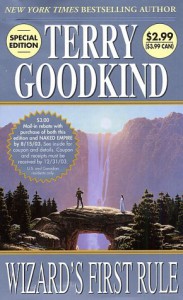 I've pretty much given up on writing "real" (read: semi-coherent) reviews of books that I don't have a commitment to review. It's easier to just tell you all the random thoughts running through my head, and my pure elation at having found a new Fantasy series that actually captured my attention. I really missed being so absorbed in a new world, that nothing else existed outside of it. I'm just head over heels in love with Richard, Kahlan, and Zed.

Wizard's First Rule is lush. It's vividly written, with that perfect amount of description, that never falls over the line into obnoxious. Terry Goodkind's writing quickly pulled me into the world that he wove for me. The line in the sand, between the magic free Westland and the magic riddled Midlands, made me giddy with excitement. If there's one thing I know, a place with no magic that borders its exact opposite, always ends in some kind of war. I hoped for a deliciously evil villain, and I wasn't disappointed.

Which brings me to characters, who impressed me just as much as the plot itself. I fell hard for Richard, and his chivalrous personality. Let's be honest, I have a soft spot in my heart for perpetual "good guys". The ones who might have to make some hard decisions sometimes, but never lose their inner spark. That's Richard, plain and simple. Kahlan had to grow on me a bit, mostly because she's shrouded in mystery for a fair bit of the beginning of this story. As the story progressed though, and I understood her better, I started to fall for her too. By the end of the book, my heart bled for these two. Kahlan and Richard forever, and I don't care who knows it.

I could go on and on about the other amazing characters, especially that deliciously evil villain. I could wax poetic about how Goodkind has mastered the art of the grey area. He manages to write characters who aren't fully evil, or fully good, but somewhere in between. It makes for a much more interesting story. Wich prompts me to warn you that there are a fair amount of torture scenes in a portion of this book. They're important to the story, but also tough to read.

Anyway, If I wrote about all of that though, this review would end up as long as this book. It's testament to how much I loved this that I listened to 36 hours of this story on audio, without blinking an eye. I was actually sad when it was over. Book two has been borrowed, and is in my possession! Let's hope it's as good as the first.