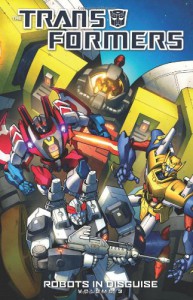 So let's see. How do I break down exactly how I felt about this particular volume of Robots in Disguise? Well, first off, I loved a lot of the art for various reasons. While the story itself was a bit difficult to wrap my head around, I loved the fact that it allowed for some interesting panels. Take the one below, for instance. There's a lot of jumping back and forth in time in this part of our story, and the panels manage to evoke that perfectly. Look at that gorgeous change in shading. Yum. 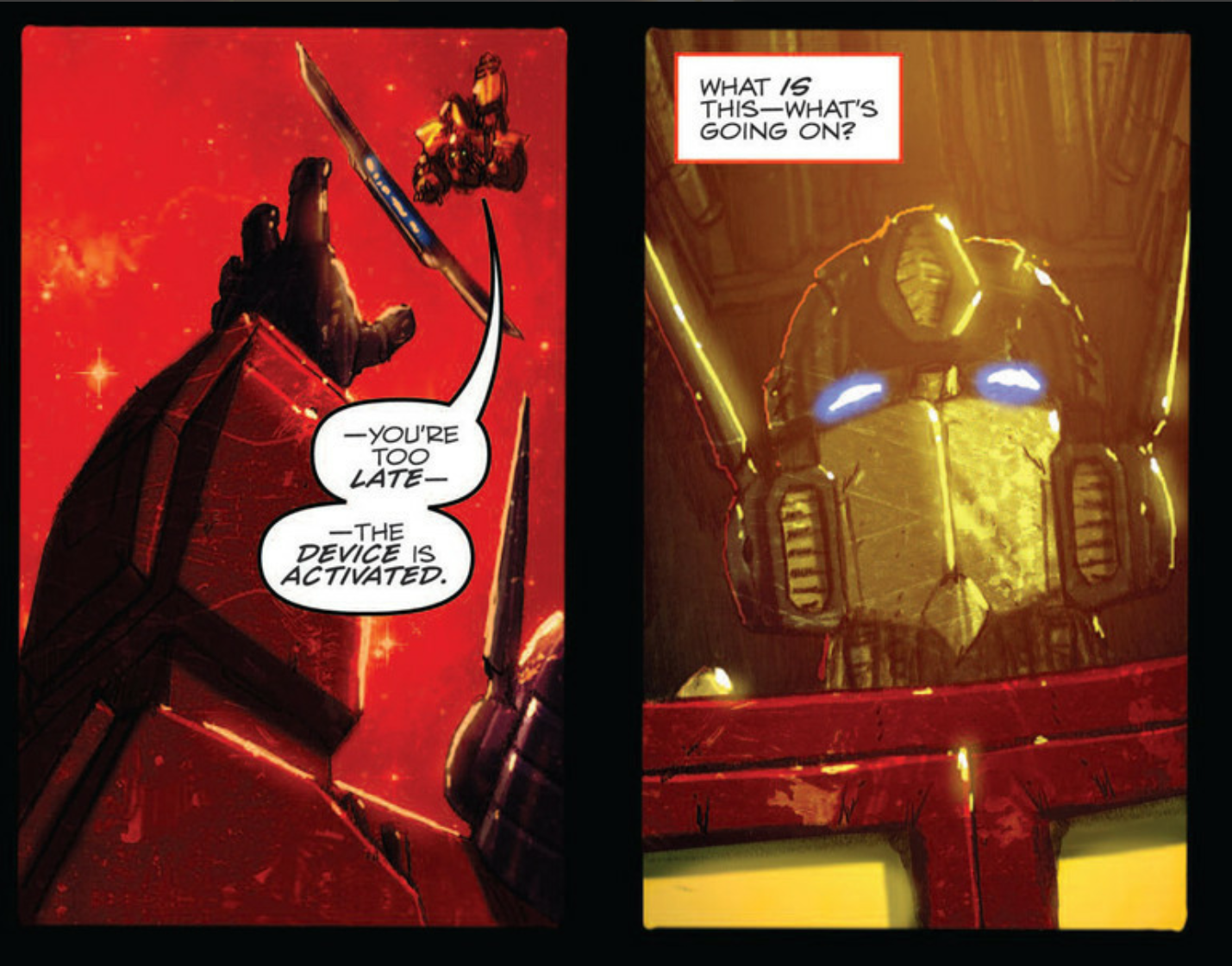 I also really liked the fact that there's a lot more backstory given in this volume. I learned a lot about Optimus Prime/Orion Pax and his crew. There's also an annual issue in here that hearkens back to the Transformers of old, and so I was able to get some insight into how their whole civilization came to be in the first place. Which, of course, further cemented in my mind that war is inevitable. They are always at war, even when they think they're not, and I sense that's coming around again. 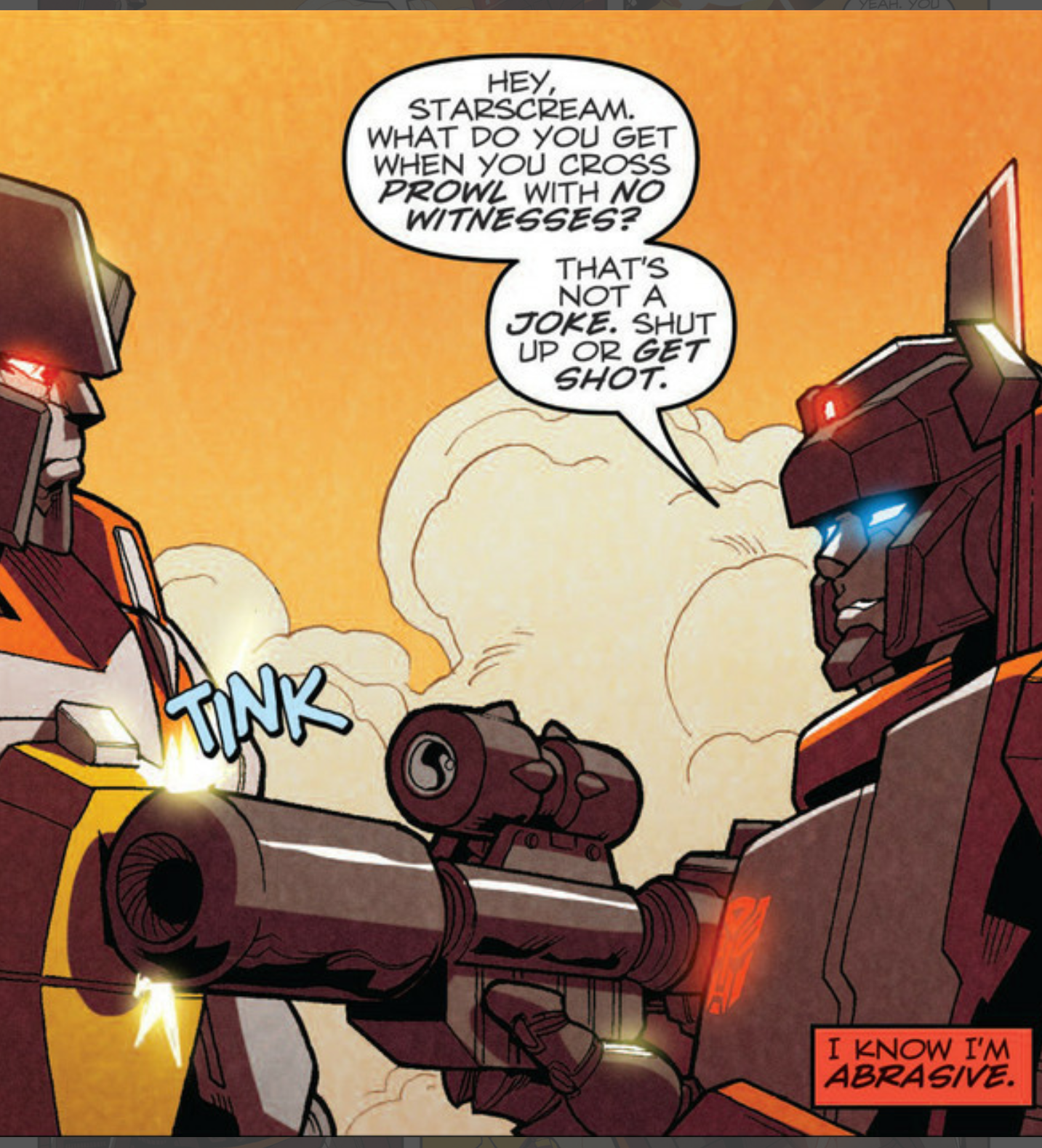 The tension keeps mounting. Starscream, Bumblebee, Prowl and Metalhawk are all part of this never ending series of backstabbing and undermining one another. It's gotten to the point where I feel anxious every time I open a new issue. I'm terrified that war is on the horizon, and yet I can't stop reading because I have to know which "side" will win. I put side in quotes because let me tell you, I'm not even sure who is backing who anymore at this point. It's all so twisted. I suppose politics always are. 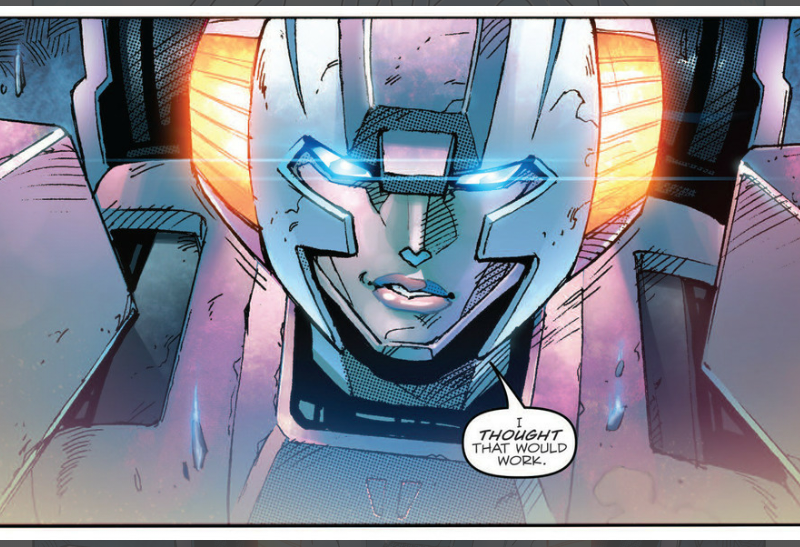 Then, there's Arcee. She's quickly become my favorite here, mainly because she's decided that the only person she backs is herself. I don't know which side she's on. It's possible she'll make me angry later. For now though, she's my favorite. She's the perfect example of an assassin, and yet I think there's something more than that to her. Time will tell.

So why the three star rating? Mainly, I just wasn't feeling this volume. There's a lot of backstory, some gorgeous art, but at the very basic level it felt like there was something missing. This series hasn't had the same kind of levity as MTMtE, and I've accepted that, but even so I felt like something besides that was missing. I can't put my finger on it.

Still, the ending was a cliffhanger and a half! I can't wait to see what happens next.