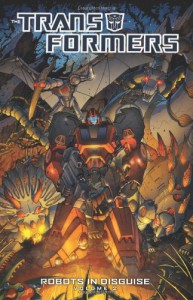 Well, color me impressed! Up until now, MTMtE was the superior series for me. This volume may have changed my mind! First off, I can't believe how twisted everything has gotten in the span of two volumes. Things have been stressful for Bumblebee since the beginning. As the impromptu leader of Cybertron, he's had to put up with all manner of terrible things happening. Now, we finally start to see how it's wearing on him. All he wants is for things to get better. I'm feeling that he's just not sure how to go about that though.

Also in this volume, we see the emotional side of Ironhide. Poor Ironhide. He's seen the future in a vision, and he has to carry around the knowledge alone. No one believes him, except perhaps the Dinobots, but most people just think he's completely crazy. I felt so sorry for him that the one time he finally felt like he might belong somewhere things went to hell. There are a lot of characters that John Barber just refuses to let catch a break. It's brilliant, but it's also so sad.

I guess what I'm trying to convey is that this is the series with a ton of emotion. It makes sense, since the whole story arc is revolving around the political side of things. These characters aren't really living, but just surviving day to day. They're having to build a whole new government, based on a tentative calm between factions. Worse yet, most of them still aren't even sure where they stand in terms of loyalty. I'm both excited and terrified to see what happens next. Open elections are imminent, and I don't know what's going to happen if Bee doesn't win.

I'm loving this journey, and learning so much! Oh, and the best part of all? Dinobots! I love them. On to Vol 3!