Devil May Care by Elizabeth Peters 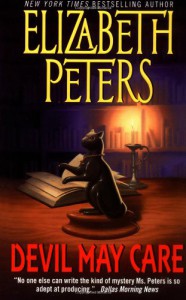 Well, the good news is that this book was much better than I originally thought it would be! In my history of reading, never have I met a more obnoxious windbag than Henry Willoughby. Luckily, he turned out not to be the main protagonist of this story, otherwise I'm pretty sure I would have given on up on this. As soon as the point of view shifted solely to Ellie, I was much happier. Her upbeat attitude, and devil may care way of handling things, really pulled me in. Ellie was fun to follow, and this story ended up flying by once I settled in.

Now, the thing about Devil May Care is that it's a bit all over the place and doesn't care so much about backstory. See, Ellie is watching her grandmother Kate's large and rambling manor. How she got this manor, I am not certain. There's quite a few references to the fact that she has copious amounts of money though, so I suppose that's all the explanation that is needed. Unfortunately for Ellie, she comes upon a mysterious object, and lands smack dab in the middle of a ghostly adventure. Heavy emphasis on the mystery portion, lighter emphasis on the ghosts. The book tries valiantly to lay some groundwork around this mystery, but it doesn't quite get there. Which, sadly, knocks the tension and excitement down a bit.

I think what I really was a bit disappointed by, was that there wasn't more supernatural action in this story. Especially because the portions that mention the apparitions were wonderful! No, this book is, at its very core, a mystery story. There is a bit of humor, some romance, and a few quirky characters. All of that isn't able to mask the fact that this whole mystery just doesn't have all that much depth to it. The good news is that it makes Devil May Care a really easy read and, like I mentioned above, it flies by. It's just not as complex, or as supernatural, as I hoped it would be.

Points to Kate's home though for being utterly charming, as well as filled with all manner of pets. Every time the book mentioned her many cats, dogs, horses, and even her pet rat, I couldn't help but smile. I mean, after all, if you're going to live in a rambling manor, why not fill it with pets? I definitely would.