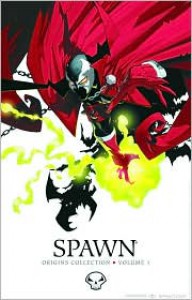 You'd be amazed at how much flak I get from my fellow comic book readers, when I tell them that I enjoy reading Spawn. The phrase I hear most is "What are you, a 14 year old boy?" I admit, I so don't get that sentiment. There's way more to Spawn then just a hellspawn who murders the wicked. He's troubled, and torn. Al Simmons is literally a man possessed. I'm thinking most of the people who say those kinds of things haven't read any Spawn since they were older because, let me tell you, this read through actually rocked. I haven't touched any of these comics since I was a teen, and the nostalgia was real.

First off, let me explain the 3-star rating. I think at the time when these comics were brand new, I was enraptured by them because it was something that wasn't the normal "capes and tights" set. Spawn was an anti-hero. Violent, angry, and sad. I loved him for that. That being said, I may or may not have overlooked a lot of the dialogue in these first few issues. Let's be honest, Todd McFarlane's art is amazing. His writing in these first 6 issues? Not so much. The story is solid, but the dialogue sometimes is just giggle-worthy. I admit, I cracked up laughing when Spawn told the Devil to "go to hell". We'll leave it at that.

Truly though, there's so much about this first volume to love. The art, which I've already praised, and will happily praise again. The introduction of a character who is beautifully flawed. I can't get over the concept of a finite amount of time on this Earth, that slowly drains away as you try to do good deeds. That counter at the bottom of the pages still gets to me. Poor Al. You poor, poor man.

Anyway, I've rambled enough. Suffice it to say that I'm definitely continuing with this series! I need more Al, more Malebolgia, and more Violator. Is it weird that he's kind of my favorite? *grins*