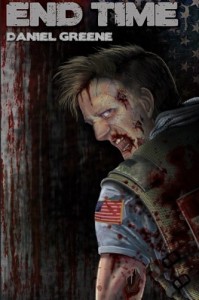 Zombies! Let it be known that if you offer me a book revolving around zombies for review, I'll likely snatch it up. I love the visceral nature of stories like Greene's. Watching people fight against not only impossible odds, but against the someone who is essentially the darkest part of themselves. Zombies are terrifying because they are us. Our friends, our neighbors, even our children. It's a great jumping off point for a story, but it's up to the author to bring it home.

Which Daniel Greene did, and did extremely well. This story was paced out perfectly. From the moment that I was dropped in the middle of the Congo, I was immersed. Greene lays out just enough scientific background, to make the spread of this disease feel realistic. As the story progressed, and I got to know our cast of characters better, I realized that Greene is simply excellent at giving just enough information without bogging things down. I always felt like I knew what was going on, and it made this an easy and exciting read.

What made End Time even better, was Agent Mark Steele. I'm used to zombie stories through the eyes of survivors. Mere people who were caught up in the madness. Mark is tough. A kind, thoughtful guy who is used to violence and the unpredictable. You'd think it would have made him the perfect candidate for this kind of event. Which is what makes this story so raw. A man who should be prepared, who realizes that he isn't. If he's not, what chance to we stand? Looking through the eyes of Steele, through the eyes of someone who is trained for anything and is still terrified, took this story to a whole new level.

My one gripe, and it's a small one, is that I really didn't like Gwen's attitude towards things. I was impressed at how much spotlight was on Mark's wife, and how brilliant she was taking care of herself. After all, zombie books often focus on the men being the keepers of the women. Still, Gwen had that typical female attitude that drives me crazy in zombie stories. I wanted to see her being strong, and rational. Not whiny, and irresponsible.

I'm glad that there's more of this to come! End Time surprised me with how well-written and fascinating it was. I'm ready to follow Agent Steele wherever he goes next.